As Buddha himself said, In the Sutra “Med Ton Djoung We do”

“Ananda, the merit accumulated by one who makes a Stupa of the Mahaparinirvana of perfect Buddhas, Tathagatas, and those who have been victorious over all demons, even If that Stupa Is the size of a myrobolan fruit, with a tree of life as thin as a needle, It’s umbrella like a leaf of the juniper leaf, the Statue the size of a barleycorn and the Relleslike a mustard seed, even though that merit Is much vaster than all merits accumulated by the sons and daughters

The History of the 30 Gesar Stupas

The Gesar Stupas are situated in the region of the Tana Monastery (‘Tana’ means ‘horse ear’) south of Nanchen County, one day’s jeep ride and two days by horsefrom Nanchen, at a height of 5,000 metres above sea level. The name of the Tana Monastery was adopted by reference to the nearby mountains whose twin peaks stand up like two horse’s ears. The Monastery was founded by Sangye Yerpa (Yerpa Yeshe Tsik) of the Yerpa Kagyu lineage in 1068AD and an ascendant

of the Ling clan who descended from the Gesar of Ling. Sangye Yerpa was the root guru of Gesar Ling who, after receiving extraordinary teachings from his root guru offered 1,500 volumes of precious scriptures all written in gold ink, with covers of carved sandalwood embossed with diamonds, turquoises and rubies.These volumes of the Kanjyur and Tenjyur (the Buddha’s teachings and commentaries by later teachers) were so heavy that it needed one man to carry

just one volume. The Ling family also donated many precious images and included Gesar of Ling’s famous sword and armour, the armour and costumes of each of his 30 ministers of state and the jewellery costumes and ornaments of their wives. The remains and relics of Gesar of Ling and his 30 ministers were in the stupa, hence the origination of the 30 Gesar Stupas. All the precious texts that had been donated were destroyed during the Chinese Cultural Revolution. As there were so many, the precious text are charred, however, the gold letterings still survive the fire and can be seen clearly on the remaining fragments. The Gesar Stupas were also destroyed and through the kindness of Samye Ling, efforts are being made to restore the stupas.

The Form of Perfection

Stupas are tall towers whose architectural features correspond directly with the way the Universe is formed. The Stupa, the focus of prayer and pilgrimage are manifestation of the perfect mind and a living embodiment of Dharmakaya, the body of the doctrine, and as such transmits positive energy to all those who come into contact with them. 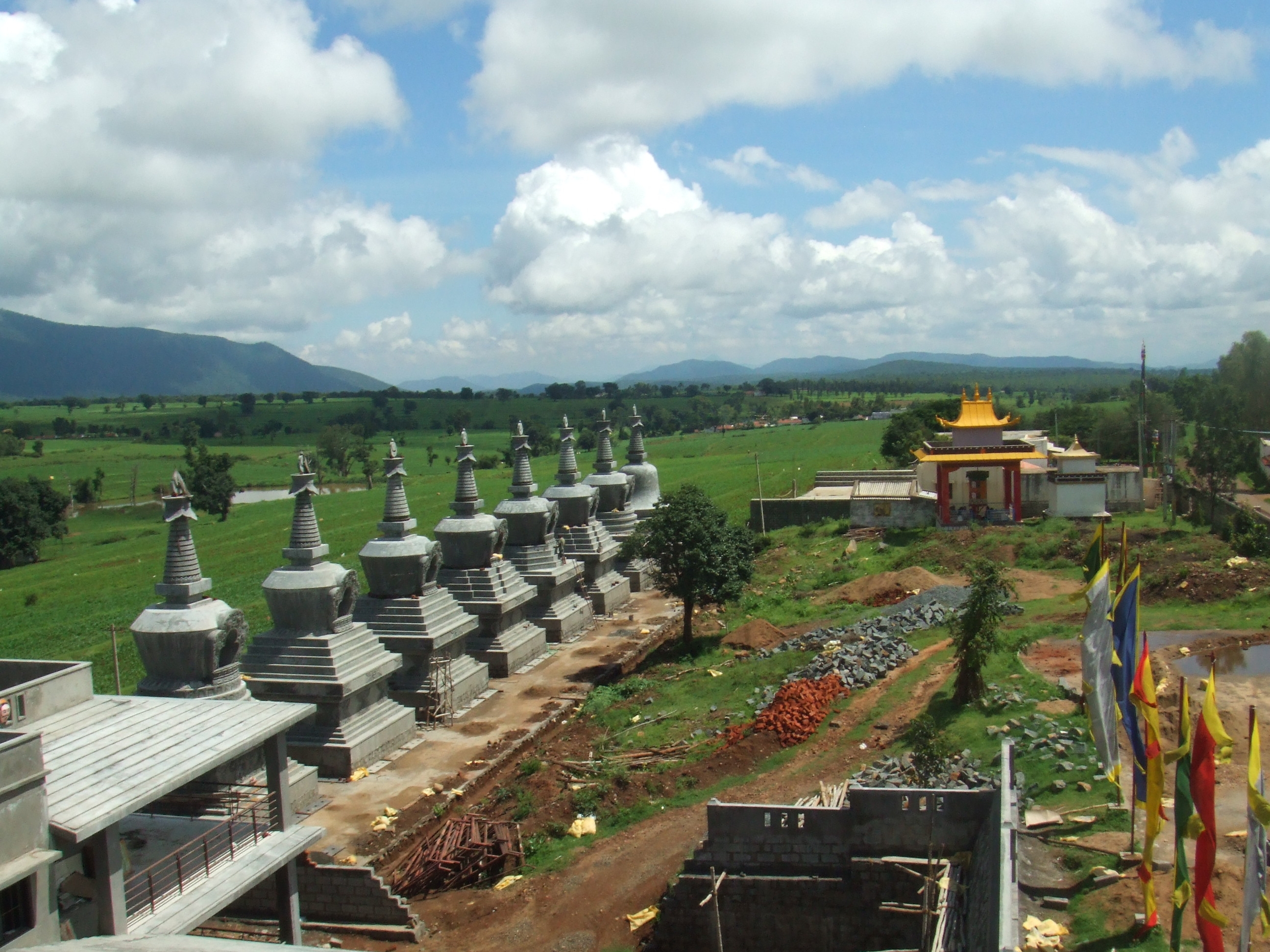 It is the wish of Tana Tulku Rinpoche, founder of the Tana Monastery in South India to build eight Stupas on part of the Monastery’s 6 acres of land allocated by the Indian Government to benefit all sentient beings and toprotect them from the five major disasters i.e. war, epidemic diseases, famine, pollution and poverty.

Meaning of the Stupa

The Stupa represents the Buddha’s holy mind; Dharmakaya and each tower of the Stupa shows the path to Enlightenment. Building a Stupa is a very powerful and effective way to purify negative karma and obscurations and to accumulate extensive merit. You can have realizations of the path to Enlightenment and beable to perform perfect work to liberate suffering beings, who equal the skyleading them to the peerless happiness of Enlightenment which is the ultimate goal of life.

(i)Clairvoyance knowledge of the Buddhadharma and becoming the great’Wheel-turning Holder of the Wisdom Teachings (Mahayana Secret Mantra) if 1,000 Stupas are built.

(ii)After death without being born in the lower realms, but be reborn as a King.

(iii)You will be like the sun, rising in the world with perfect senses and beauty in form.

(iv)You will be able to remember past lives and see future lives.

(v)You will be able to listen to the Dharma without forgetting.

(vi)All negative karma and obscurations including the five uninterrupted negative karmas are purified even by dreaming of a Stupa, seeing a Stupa, hearing the sound of the bell of a Stupa and even for birds and flies, etc., by being touched by the shadow of a Stupa – “Stainless Beam Sutra.”

(vii)The sentient beings will always be protected by the Buddhas who will always be guiding them to achieve complete enlightenment. They abide in the irreversible stage.

(viii)In Shakyamuni Buddha’s sutras, it is extremely powerful to build a Stupa for those who have passed away as it immediately changes a suffering rebirthinto a fortunate rebirth with the opportunity to meet the Dharma.

(ix)It can also heal those with serious diseases.

Hence dedicate to your ancestors, family members and friends who have passed away or who are sick and for the happiness of yourself and your family in thisand future lives.

Benefits and merits resulting from circumambulating the Stupa

The sublime Shariputra, renowned for his great Intelligence, asked the Buddha: “Could you say what are the benefits of circumambulating a Stupa ?

” Here are the benefits occurring to one who circumambulates a Stupa. Free of the ‘eight unfavourable circumstances, he will be reborn in a noble family and will own numerous riches ; free of conflicting emotions (avarice, etc … ) he will enjoy practicing generosity, he will be handsome, attractive, will have a beautiful complexion, others will delight In seeing him ; he will have power over the world and will become a King of Dharma. Then he will obtain a fortunate rebirth and will be enthusiastic for the Buddha’s teaching; having completed the practice (yogas), he will perform great miracles andprogressively obtain the thirty two pure marks and the eighty physical perfections of the Buddha’s Body”.

Such was his answer.

These few benefits are nothing compared to all those that could yet be enounced about the circumambulation of a Stupa. By only seeing a Stupa, listening to the qualities of a Stupa, remembering a Stupa, touching a Stupa, etc … or even If It was only by passing in the shade of a Stupa, or being touched by the wind that passed over a Stupa, one will obtain happiness In this life and ultimately Awakening.

Construction of the Stupas

Each Stupa sits on a square base the Lion’s Seat whose four sides represents the four qualities of mind basic – (love, compassion, joy and equanimity) to the attainment of enlightenment. The base is then traditionally filled with jewels, precious texts and relics pertaining to the tradition of the Stupa building. On the Lions seat are then built five steps representative of the progress of the mind towards enlightenment. Each step can be divided into two and alludes to the ten levels of Bodhisattva realization.

On top of the steps is the Bumpa, a rounded form where a meditation room can be accommodated or it can be filled with precious and pure representations of the Buddha’s mind. The Bumpa itself is the representation of the seventeen levels of the Realm of Form. Out of the Bumpa a spire forms and on top of that sit ornaments which together represent the four stages of the Formless Realm. The Stupa’s outer and inner manifestation mirrors the pure mind.

A central axis called the Sog Shing meaning ‘Life Stick’ is traditionally made from sandalwood or juniper. A monk with full ordination vows then craft the wood into the tapered shape and mantras are painted or craved over its surface and then wrapped in precious materials and affixed in place on the Lion’s seatto protrude to the Stupa’s highest point.

The Stupa is filled with relics which symbolically represent the utmost purity of mind and the Stupa itself represents the Buddha’s body and the Relics its life force and as such are even more vital than its outer form. The first relic, the Dharma relic or Tsa Tsa are small clay models of the stupas made by monks, nuns, or lay people who have taken the refuge ceremony and who have taken the eight precepts or Buddhist vows.

The second, third, fourth relic, to be placed in the Stupa is the remnant of the body of the Buddha himself, the Buddha’s rove and white grain of the Buddha’s bone respectively and the relics of the Great Masters, Guru Rinpoche, Tilopa, Marpa, Milarepa and His Holiness the 16th Gyalwa Karmapa.

Finally the fifth relic is the Mantra relic which includes the 84,000 teachings of the Buddha along with the commentaries. A blessing ceremony takes place once the Stupas are completed and all the relics in place.

The benefits of the Stupa emanate far and wide and are said to go on for Aaeons.The positively generated is immeasurable. Liberation is said to be given by merely hearing about a Stupa, by touching, seeing, praying walking around it and having the offerings made to it.